poison ivy showing off among the Myrtle and Oregano 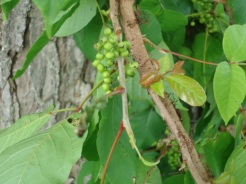 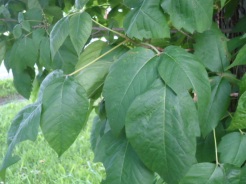 [Disclaimer: I am not a botanist, but I do know poison ivy when I see it, and the Virginia Creeper vine is prominent in this area, and is often mistaken for poison ivy or other poison plant. The Virginia Creeper leaves appear to me to have notched edges, and the leaves are much larger than Poison Ivy leaves. Also, the color of the leaves can be deceiving on both plants, and both have berries and similar vines.]

Anyone who is not personally familiar with the ominous plant–which is not only quite innocent looking, it is actually pretty in its natural state, growing up a tree or in a patch, poison ivy hides (dare I say lurks) within innocent patches of grass or miscellaneous weeds…or flowers.

[Note the photo featuring the gorgeous aged log, with the single Poison Ivy sprig proudly displaying itself, the shiny bright green Myrtle, and the herb Oregano (which is another story.) The poison ivy is pretty much under control back in the tree garden, where this photo was taken.]

Poison ivy is often the butt of jokes, told gleefully by people who have never been afflicted with the full-blown rash.  Well, it is not funny!     For the uninitiated: poison ivy is a source of irritation ranging from a single tiny postule… or blister…to a full-blown patch of itching, red, swollen, infected-looking skin.

The first time I experienced this diabolical affliction was in Oklahoma, in about 1958.  Within a few hours of contact with the toxin I had Poison Ivy spread on both arms, the inside of my thighs, and the rash was shiny and evil-looking, and the itching was almost uncontrollable.  I had to be physically restrained from scratching the rash.    No amount of Calamine Lotion, or alcohol (rubbing or otherwise)  helped.

For about twenty years after that I managed to avoid poison ivy.  But then when I moved to my present location in the 1970s I got it numerous times over the next few decades.

It does seem that my body has developed some degree of immunity to poison ivy, but I still get it.     I can feel it when it begins, when the first little bump develops.    There is pain associated with a poison ivy episode, and a general vague sick feeling.  I have told the doctor that it reminds me of hemorrhoid pain, but he just laughs at me.  HE has never had poison ivy.

Which reminds me I did have a hilarious exchange with my chiropractor a couple of years ago.  I had poison ivy on my face and neck, and he was reluctant to touch the area.   I told him it wasn’t  contagious, and cautioned about my theories of scrubbing the skin well with a strong soap if and when he actually was in touch with poison ivy (pun intended.)   When I was waiting to pay at the desk, the chiropractor came out of the back and entered the general restroom, where supplies were also kept, and “strong soap” was available.   He looked at me and said “I’m going to wash my hands real good, like you said.”  We both laughed about the patient (me) advising the doctor (him) to wash up well.  .

THEY, the poison ivy experts (–that is people who have actually had it personally) have compiled lists of FACTS about it.  This is not theoretical information, but actual suffer-and-scratch poison ivy veterans.

Then there is the “go to the doctor and get a shot” advice crowd.   This is effective when the victim (er, patient) is pretty much covered with the rash.   We took my oldest son for the shot treatment one time when he came in the house and said “Mom!  I have it everywhere!”  Taking his word for it, he did get the injection.   The serum  was effective.  We also have some prescription ointment that helps with the itching and pain.

The single, most effective, and absolutely best way to avoid the outbreak of the poison ivy rash is prevention–soap and water.     There are special soaps that are intended specifically as “poison ivy soap,” but I have found that ANY strong soap  is effective in washing off the poison that causes the outbreak in the first place.   Obviously reaching a place to wash up is not always an option, but I think the purpose is simply to remove the toxic substance and prevent infection.

Another thing that I have found is that wearing long-sleeved shirts and jeans or other long pants is always a good idea when hiking or working around an area where poison ivy exists, or is likely to exist.

Right now, even as we speak, I have poison ivy infection on the tops of both hands, near my wrists.   The patchy area is red, and slightly swollen, and itches like mad.  Fortunately it is a small, contained area.   A huge bottle of Hydrogen Peroxide is always handy,  and serves to soothe and disinfect areas of open rash.  (Some say bleach works, too.)

Huh…I hear the thoughts “why the heck didn’t she apply her accumulated knowledge and avoid the exposure?”   In my defense, it was just a “stray” leaf or two hiding among some grass in my Hibiscus that caused my current rash on my hands.  I knew it was there, and fully intended to go into the house immediately and wash it off.    (You know what they say about good intentions! 🙂